SEC Proposes Changes to the Definition of “Exchange” under

The U.S. Securities and Exchange Commission (SEC) has issued a rule proposal (the Proposal) that would significantly expand the definition of “exchange” under Rule 3b-16 of the Securities Exchange Act of 1934 (the Exchange Act). The Proposal would expand the definition of an “exchange” to include systems that offer the use of non-firm trading interest and communication protocols to bring together buyers and sellers of securities.1 The Proposal provides an expanded and somewhat ambiguous definition of “exchange” that will likely give rise to further regulatory uncertainty for digital assets, especially until the SEC provides greater clarity regarding which digital assets are securities.

Adding to the uncertainty, in a recent speech, SEC Chairman Gary Gensler noted that alternative trading systems (ATSs), which often serve institutional investors, are different from crypto asset trading platforms, which are largely used by retail investors. Chair Gensler has asked SEC staff to consider how retail investors on crypto platforms can receive the same protections as non-retail investors receive on exchanges.2

Proposed Changes to Rule 3b-16

The Proposal seeks to broaden the definition of “exchange” by:

Platforms That May Fall Under Revised Rule 3b-16

While the Proposal estimates that there are only 22 communication protocol systems, the Proposal in its current form could potentially cover large swaths of the decentralized finance industry as well as platforms using other technologies. For example, although the Proposal does not explicitly reference digital assets or decentralized finance, the following could be considered “exchanges” under the Proposal if they were found to be trading one or more assets that were securities—the SEC likely views all tokens other than Bitcoin and Ether as securities.

AMMs, which are code-based protocols, provide the necessary liquidity for users to conduct trading activity on a DEX, a peer-to-peer marketplace that allows users to trade digital assets without an intermediary. Each AMM smart contract holds liquidity reserves that are funded by liquidity providers who deposit tokens in a pre-determined proportion into the liquidity pool. 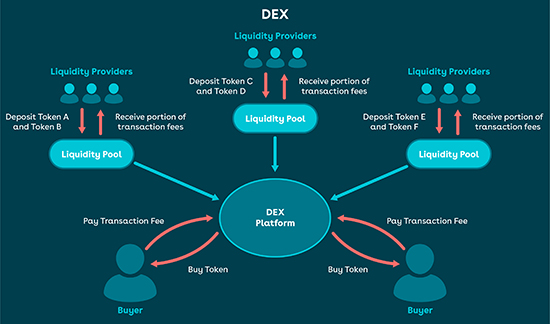 If a liquidity pool contains digital assets that are considered securities, a DEX that utilizes AMMs could be considered an “exchange” under the Proposal. Operators and developers of DEXs and AMMs should consider whether any of the digital assets on such platforms are or may be securities. If so, the operator or developer should consult with counsel to determine the best path forward for registration if the Proposal is adopted.

Rule 3b-16 of the Exchange Act currently defines an exchange as a system that “brings together the orders for securities of multiple buyers and sellers” using non-discretionary methods. One of the Proposal’s most significant changes is to add another prong to the “exchange” definition to include any system that “makes available established, non-discretionary methods (whether by providing a trading facility or communications protocols, or by setting rules) under which buyers and sellers can interact and agree to the terms of a trade.”

Such regulatory action against a developer is not unprecedented. In 2018, the SEC charged Zachary Coburn, the founder of EtherDelta, a digital asset trading platform, for causing EtherDelta to act as an illegally unregistered exchange. Notably, the SEC brought its action after Coburn sold the platform to foreign buyers and had no further involvement with the operation of the platform.3 While the action was brought after Coburn sold the platform, the relevant period of activity in the action was the period in which Coburn operated the platform.

Under the Proposal, if a developer or group of developers were found to be operating an exchange, they would be required to register the software protocol as either an exchange or an ATS and the software developers would be responsible for regulatory compliance and related costs. Software developers should consider their degree of involvement in similar projects and consult with counsel to consider potential registration requirements if the Proposal is adopted.

The Proposal states that a group of persons who play a role in implementing and operating a system may constitute a “market place or facilities for bringing together purchasers and sellers of securities and together meet the definition of exchange.” Under the Proposal, such a group of persons, even if formally unaffiliated, might be responsible for the system’s regulatory compliance. When digital assets that constitute securities are involved, the Proposal could implicate operators of websites that facilitate the use of a DEX, miners or validators on the blockchain where the AMM is stored, and/or liquidity providers to the AMMs, among others, many of which do not have a counterpart in a traditional centralized system.

While it is not clear which group members would be responsible for regulatory compliance when a group is involved, based on the nature of existing DEXs, it is unlikely that any one group member would possess all of the information necessary to fulfill that responsibility. This creates additional uncertainty for DEXs.

The Proposal’s inclusion in the exchange definition of the new “makes available…” phrase could be interpreted to cover technologies that provide communications between users and markets, such as order management systems or order routing systems.

On the one hand, the Proposal explicitly does not apply to communication providers that provide only general connectivity without protocols. On the other hand, if a system is designed with a focus on assets that are securities and provides communication protocols, the Proposal states it may meet the definition of an “exchange.” The Proposal provides examples of communication protocols that would lead to a communication provider being treated as an exchange, including setting minimum criteria for what a message must contain, setting time periods in which buyers and sellers must respond to messages, limiting the types of securities about which buyers and sellers can communicate, setting minimums on the size of the trading interest, or organizing the presentation of trading interest to participants, among others.

Providers of communications technologies that make available the types of protocols indicated above should consider whether their systems would fall within the expanded definition of “exchange,” and if so, consult with counsel to determine potential registration requirements if the Proposal is adopted.

The Proposal specifies that utilities and electronic web chat providers are not considered communication protocol systems, because these systems are not specifically designed to bring together buyers and sellers of securities. Many messaging platforms are not “designed for securities” so they likely would not be exchanges under the Proposal.

However, the Proposal indicates that the SEC will take an “expansive view” of what constitutes communication protocol systems. Consider, for example, a group of users who set up a channel or thread on a discussion website to interact and trade securities. Under the Proposal’s language, the website may be regulated as an exchange because it provides a communication protocol system that would be viewed as facilitating a securities trade.

Additionally, platforms that are designed for securities (such as certain securities-focused websites with a message board or messaging feature) may fall within the revised exchange definition if they “provide communication protocols for buyers and sellers to interact and agree to the terms of a trade.” Since all that is required under the Proposal is a “non-firm trading interest,” naming a particular security on a website, along with at least one of quantity, direction, or price may be sufficient for that website to be considered an exchange. The operators of such websites should consider whether users are permitted to use their platforms to facilitate trades and should consider adopting measures to prohibit users from facilitating trades in digital assets that could be considered securities.

The Proposal acknowledges that if it were adopted, some no-action letters and other staff statements may be moot or superseded and would therefore be withdrawn or modified. The Proposal states explicitly that to the extent a system is currently operating under the guidance set forth in a no-action letter, and that system would be required to register under the Proposal, it can no longer rely on the applicable relief.

7. Entities That Attempt to Use Discretion to Avoid the Requirement to Register

As noted earlier, Rule 3b-16 currently defines an exchange as a system that “brings together the orders for securities of multiple buyers and sellers” using non-discretionary methods. The Proposal retains the requirement for non-discretionary methods, though it now includes as exchanges entities that make available such methods, as well as those that use such methods. However, if an entity attempts to avoid registration solely by granting a system operator discretion for handling trading interest, the Proposal would prevent such evasion by requiring the entity to register as an exchange or an ATS.

How Market Participants Can Prepare

To the extent the Proposal is adopted substantially in its current form, market participants should consider whether and how they will be affected. Developers of platforms that can be used to facilitate trading of assets that are securities should be prepared to undertake the significant cost and lengthy process of registering as an ATS, or carefully structure those platforms to avoid the ATS registration requirement. This structuring can be done by establishing platforms outside of the United States and geo-blocking United States users (though the developers and platforms would still need to comply with the applicable laws of the jurisdiction in which they are located). Alternatively, developers could base platforms in the United States and license the technology to a registered broker-dealer, while ensuring that developers do not participate in transactions and receive no fees that could be viewed as transaction-based compensation. There may be other options depending on the structure of the relevant platform and developers should consult with counsel in each instance to consider the potential requirements.